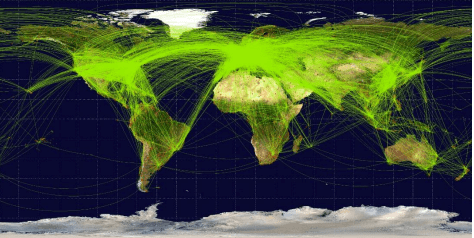 The big European carriers are all changing their economic models as they introduce new technology for selling to corporate customers. How will the shake-up affect the way you book air travel - and how much you pay for it?

For most of this decade travel buyers have expected a Big Bang in airline distribution. Some carriers
have announced a shift to New Distribution Capability (see “What is NDC?” below for an
explanation). But Big Bang certainly hasn’t happened yet. The International Air Transport
Association, which announced NDC way back in 2012, has admitted that transactions numbers
remain tiny.

Yet although NDC remains far from an everyday reality, the business model around airline
distribution is starting to change in anticipation of it, especially in Europe. The big three airline
groups have all introduced surcharges for bookings made through the conventional global
distribution technology used by TMCs. In turn, the three largest global TMCs have introduced
surcharges to their clients for bookings NOT made through a GDS.

So what is going on, and where is this situation heading for airlines’ corporate clients?

What is NDC?
NDC is a set of standards for airlines to sell seats and ancillaries via Web-based “pipes” (known,
technically, as application programming interfaces) via indirect channels. It means that, unlike the
GDS pipes they use today, the content sold by TMCs to their corporate customers will look very
similar to what those same customers would see if they bought directly from the airline’s website.

In theory, this makes buying ancillaries cheaper, allows airlines to create more flexible and
customised offers through the indirect channel, and creates competition for the GDSs.

What have airlines done?
So far, around 55 carriers have begun adoption of NDC standards. A few have tied that move to
changing their distribution strategies too.

Lufthansa Group (Lufthansa, Austrian Airlines, Brussels Airlines and Swiss) was first. In September
2015 it introduced a Distribution Cost Charge of €16 per booking for reservations made through
GDSs.

This year, Lufthansa began to incentivise non-GDS channels as well. It has introduced a €1 bonus to
TMCs and other intermediaries which book through NDC-based channels. In addition, Lufthansa is
reducing some of its short-haul fares by by €20 per return ticket if they book via NDC or direct.

IAG sister airlines British Airways and Iberia introduced a GDS surcharge of €9.50 per flight in
November 2017. They did this at the same time that they announced a major initiative to implement
NDC. BA also introduced “private channel” arrangements that exempted TMCs from the GDS
surcharge if they committed themselves to a “roadmap” for shifting to NDC.

Meanwhile, like Lufthansa, BA has launched its first fares exclusively for NDC and direct channels in
the form of additional price points on short-haul routes.

Air France-KLM introduced a GDS surcharge of €11 per one-way booking in April 2018. Like BA, it has
also made private channel arrangements which exempt selected TMCs from the surcharge.

What the GDSs are doing
The big problem for nearly all TMCs is that their air reservation, and post-reservation management,
processes rely on GDS technology. TMCs are also economically dependent on the incentives they
earn every time they book through a GDS.

GDSs are building their own NDC pipes to airlines. Amadeus, Sabre and Travelport all aim to be NDCready
in the next year. However, they face difficulties. The biggest technical challenge preventing
NDC adoption so far is that NDC works well for looking and booking. But NDC bookings are
incompatible with the post-reservation back-office processes that provide essential services for
TMCs’ corporate clients. Generating management information reports is the most obvious example.

At the moment, TMCs have to create dummy records (called passenger name records) for NDC
bookings in the GDS so they can carry out their back-office duties. According to reports, airlines and
GDSs haven’t found a way to transfer NDC booking data into PNRs even if the GDS itself were to
handle NDC reservations.

What TMCs are doing
American Express Global Business Travel, BCD Travel and Carlson Wagonlit Travel are among the
TMCs which have signed private channel deals with BA/IB and AF/KL. Yet they have all introduced
fees globally to their corporate clients for bookings made outside a GDS. The fees are generally
US$10-$15

A memo from CWT to its customers explained it is charging more for non-GDS bookings because
making those reservations is more costly for the TMC..“The non-GDS direct connect model
fragments content, fails to provide full fare transparency, and is a step backwards in technology and
efficiency,” CWT said

The TravelpoolEurope perspective – Right now, NDC is good only for suppliers, not buyers
Very few airline sales are going through NDC pipes today, yet the new model is already influencing the corporate travel process – and not in a good way. With Lufthansa withdrawing its best fares from GDSs, and TMCs starting to charge fees for non-GDS bookings, travel buyers are currently being moved away from their ideal of a single marketplace.

For buyers, the biggest challenge is finding the best possible fare for a flight. Anything which makes that task harder pushes their costs up, so the only conclusion right now is that NDC may be in suppliers’ interests but is not in buyers’ interests.
If the technical problems can be overcome, then adoption of NDC-based distribution by GDSs could provide the solution. But if that happens, airlines will surely expect GDSs to lower their fees. That would have consequences, with GDSs reducing incentives to agents, who in turn could introduce subscription fees to clients for making GDS bookings.
Subscription fees might be a good thing. It would make the money flow in airline distribution more transparent, and perhaps we would see some competition for the big three GDSs, which could help push down costs. Right now, it’s still not clear, but airlines certainly have more to do to demonstrate that introducing NDC helps their customers and not just themselves.